OSLO, Norway (Reuters) -- A thaw of the Arctic icecap is accelerating because of global warming but nations in the region including the United States are deadlocked about how to stop it.

Due for publication on November 8, an eight-nation report compiled by 250 scientists says the Arctic is warming almost twice as fast as the rest of the planet due to a buildup of heat-trapping gases and the trend is set to continue.

\"We are taking a risk with the global climate,\" said Paal Prestrud, vice-chair of the Arctic Climate Impact Assessment (ACIA) report, which says emissions of gases from cars, factories and power plants are mostly to blame.

The Arctic icecap has shrunk by 15-20 percent in the past 30 years and the contraction is likely to accelerate, Prestrud said. The Arctic Ocean could be almost ice-free in summer by the end of the century.

Inuit hunters are falling through ice, permafrost is thawing and destabilizing foundations of buildings and vital winter roads while the habitat of creatures from polar bears to seals is literally melting away.

The report says that the thaw will have some positive side-effects. Oil and gas deposits will be easier to reach, more farming may be possible and short-cut trans-Arctic shipping lanes may open.

Nations split
Diplomats said governments in nations around the Arctic rim -- the United States, Russia, Canada, Denmark, Norway, Sweden, Finland and Iceland -- disagree about what to do, with the United States most opposed to any drastic action.

Arctic nations are meant to agree on policy recommendations based on the report at a meeting of foreign ministers in Iceland on November 24.

\"U.S. negotiators say 'we already have a policy on global warming -- we can't have a new one just for the Arctic',\" one European diplomat said. Government negotiators will try to break deadlock with a new round of talks in mid-November.

President George W. Bush pulled out of the U.N.'s Kyoto protocol on global warming in 2001, arguing it was too expensive and wrongly excluded developing nations.

The other Arctic nations, most recently Russia, have agreed to Kyoto's target of cutting developed nations' emissions of carbon dioxide by five percent below 1990 levels by 2008-12.

The WWF environmental group on Tuesday accused the eight nations, which account for 30 percent of global greenhouse gas emissions, of hypocrisy in sponsoring the Arctic report while failing to crack down.

\"The big melt has begun,\" Jennifer Morgan, director of the WWF's global climate change campaign, said in a statement. She said industrialized nations were using the Arctic as a guinea pig in an uncontrolled experiment on climate change.

Scientists have agreed to discuss parts of the report ahead of full publication -- Reuters published main conclusions in September. Some European governments originally wanted the report issued before Tuesday's U.S. presidential election.

The report projects that temperatures in the Arctic will rise by 4 to 7 degrees Celsius (8 to 14 degrees Fahrenheit) in the next 100 years. If temperatures then stayed stable, the Greenland icecap would melt altogether in 1,000 years and raise global sea levels by about seven meters (23 ft).

The thaw of the icecap floating on the Arctic Ocean does not affect sea levels, in the same way that a full glass of water with an ice cube jutting above the brim does not spill when the ice melts since ice takes up more space than water.
Click to expand...

It's bad news for humanity is all I can say.

Well, not all I can say... buy some fins and take a SCUBA course.

Still haven't heard any responses from these scientists when they were told that the earth was warmer in the dark ages? they must be living under a rock... or maybe they are ignoring it because they are worried about their job security

"What if all the ice melts?" Myths and realities

# The evidence does NOT indicate that any human activities are causing global warming.
# The best explanation for the evidence is that if there is any global warming, it is mostly the result of natural influences like variations in the climate system and variations in solar radiation.
# The suggestions that human activities will cause significant changes in global temperature and sea level in the next century are flawed predictions which haven't been confirmed by any real changes.
# The solutions to this apparently non-existent problem proposed by environmentalists would not have a significant effect on climate, but they would cause a significant amount of human suffering.
# Based on what we know now, in the next 100 years a rise in sea level of 0.1 meters (4 inches) would not be surprising; those predicting changes of 0.5-2 meters are using defective models.
# If all the icecaps in the world were to melt, sea level would rise about 75 meters (250 feet). This could not result from modern human activities, and from any realistic cause would take thousands of years to occur.
Click to expand...

That is just the summary. The orginal article is a very fascinating read. It even has picture of Earth with sea levels 75 meters highter. Neat. 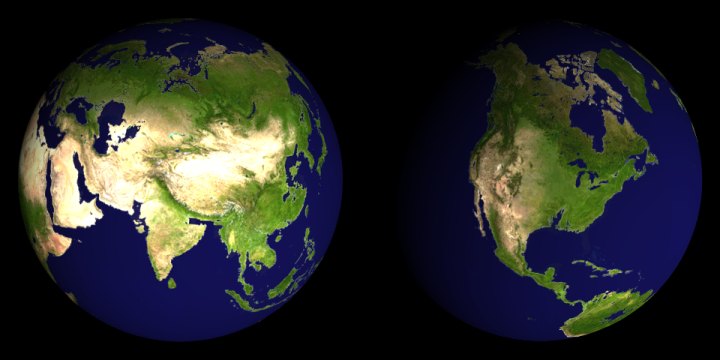 That was an interesting article Smuda. Thanks for posting the link. I just read a book about Ice Ages. They tended to last for thousands of years. Inbetween you had interglacial ages, of which we are in one currently. They believe the current interglacial age will last another couple of thousand years before the planet moves back into another glaciated age, perhaps started with a change in the electromagnetic field. This will move the magnatism of pure "north" to the "south."

It is hard to know, in this day and age, what issues - such as global warming - have merit and which do not. To me, it seems everyone gets a bit hysterical about such matters. Maybe that is because we have only recently begun to take note or the processes of the world around us. Maybe in another couple of thousand years, should humans still be in existence, we will learn to chill out and accept the ebb and flows of the climactic scene. Till then, we are learning and may come up with some interesting ideas which only time will test out and prove.
You must log in or register to reply here.
Share:
Facebook Twitter Reddit Pinterest Tumblr WhatsApp Email Share Link