8 Jun 2021
Australian police have arrested more than 200 people involved in organised crime after infiltrating an encrypted messaging app that opened up nearly 25 million messages about “industrial-scale” drug imports and murder plots, officials said.
They announced on Tuesday that the joint operation between Australia and the US Federal Bureau of Investigation, which began in 2018, had ensnared criminals involved in the global drugs trade in Australia, Asia, South America and the Middle East.
KEEP READING
The dark world of cybercrimeCybercrime robbers steal up to $1bn from global banksTurkey cracks down as cybercrime rises amid pandemic
Dubbed “Operation Trojan Shield”, forces in 16 countries monitored as members of the mafia, Asian crime syndicates and outlawed motorcycle gangs discussed drug deals, money laundering and even gangland hits.
Australia has struck “a heavy blow against organised crime – not just in this country, but one that will echo around organised crime around the world. This is a watershed moment in Australian law enforcement history,” Australian Prime Minister Scott Morrison told reporters in Sydney.
Australia did not detail any arrests in other countries but said Interpol and the FBI would hold news conferences later on Tuesday.


Play Video
The plan, which was conceived by Australian law officers and the FBI in 2018, saw officials in the US take control of a messaging app called AN0M, which authorities said was popular with organised criminals.
When an Australian underworld figure distributed the app to his associates as a secure means to communicate, law enforcement authorities could monitor all their messages.
“We have been in the back pockets of organised crime,” Australian Federal Police Commissioner Reece Kershaw told reporters at the same press briefing.
“All they talk about is drugs, violence, hits on each other, innocent people who are going to be murdered.”

Kershaw said one murder plot involved plans to attack a café with a machine gun, while a family of five was also targeted – attacks the authorities said they were able to prevent.
A total of 224 people were arrested on Monday and 104 firearms seized as well as almost 45 million Australian dollars ($34.9 million) in cash.

A total of 525 charges have already been laid but authorities expect more in the coming weeks. 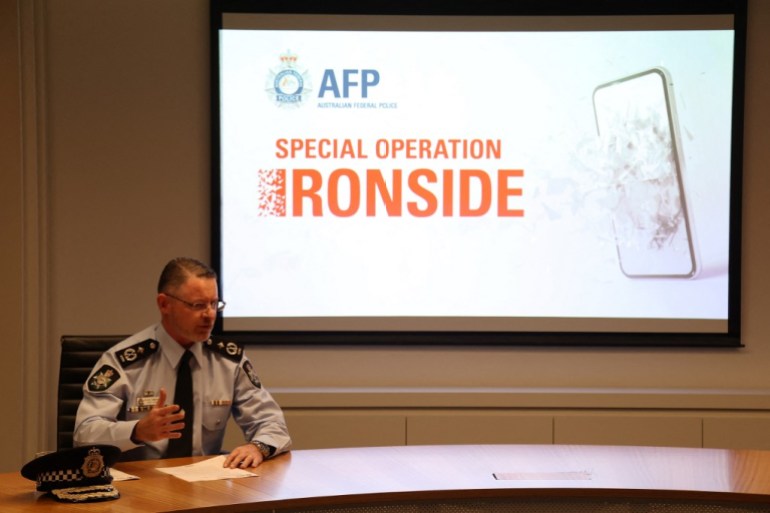 Australian Federal Police Assistant Commissioner Nigel Ryan gives a presentation after a press conference in Sydney following the arrests [David Gray/AFP]As well as securing the ability to decrypt messages in real-time, the FBI and others are said to have launched an elaborate plot to encourage suspected criminals to use AN0M cryptophones.

The devices had no email, call or GPS services and could only message other AN0M phones, They could only be bought on the black market and required a code from an existing user to access.
Australian media reported that agencies helped distribute the phones to known suspects – including an Australian fugitive drug boss on the run in Turkey – in a bid to gain trust.
“Criminals needed to know a criminal to get a device,” the Australian Federal Police said in a statement.

New Zealand Police said it was the “world’s most sophisticated law enforcement action against organised crime to date”.
According to a statement by the New Zealand police, more than 300 authorities executed 37 warrants starting last Monday.
Detective Superintendent Greg Williams said 35 people had been arrested across the country so far on 900 “serious drug dealing, money laundering and other conspiracy-type charges” and were due to appear in court Tuesday.
Police in New Zealand seized methamphetamines, firearms, and millions of dollars in cash and assets during the operation.
“Warrants are coming in and we expect a number of other arrests to be undertaken,” Williams told reporters in Auckland.
SOURCE: AFP, AL JAZEERA, REUTERS

A tech-savvy convicted drug trafficker has been revealed as the person who invented the Trojan horse app AN0M.