Is the stargate in the tv show real?

Freak Show said:
maybe it's non functional to us, hell, how long has it been since we have supposedly been to the moon. maybe WE can't figure it out
Click to expand...

Dan Burish, in the video above, said that one was left on, but what had occurred, was that the users at the other end were sending low level impulses, which could collectively affect our genetic directions of biological stances, more towards reptilian.

This cannot be done, due to rules based in the biological functionary aspects of mammalian hapologies. It was put forward by the Bushes, in their terms as presidents, that Pentagon scientist now say were in an ice age. Not going into one, but in it now". To alter that contract, would be to bring complete and utter catastrophe to this world. Hapologies, a variant on a main-stem line of established evolution, to where a variant is either styled, or a phenotype.*An ice age is a prescribed by tone to that world happening and has to happen, is that world is to remain normal within the future tense.

This is why the time travels says of H.G. Wells, to where mankind degrades because he is out of contact, with this new cold period that's supposed to be, is so very important in the understanding. The ultimate outcomes, is that humankind, raises humankind as a resource. This eventuality, is in no way good.

I know in my accessement of the Pleiadeans who came to the Billy Meier Farmstead, what this whole deal was about was an attempted re-servitude of intelligent man to them, as both a genetic source of materials and as a slave race. I mean this attempted translation by them was so gross, they might as well have been giving public seminars on how to give people oral sex in disease filled alleyways. "Real bad crap"! I feel that this deception is why said Cosmonaut Semjase, said Sem-ya-zee, had her purported bad head injury falling accident, while at the Meir house-hold. These beings were trying to spin off one big misconception.

Humankind has to be let loose or the future is too morbund to be able to be accepted.

Sources, Man on way to Halloween Party is frozen in place, by device unknown as high-tech being from future explains to him that he is both from the future and an eater of other humans.(The best of Art Bell), Please contact wwww.coasttocoastAM.com and ask for transcript describing topic said, to be emailed or delivered as source materials.

I think the movie was correct...that they found it in the 20's and then couldn't get to operate until probably the 70s or 80s. The tv show explained that the 'dial-home-device(dhd)' wasn't found with the stargate and they had to make an artificial one to operate it. 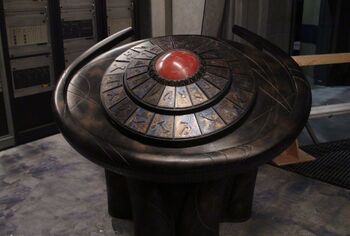 NaturalPhilosopher said:
I think the movie was correct...that they found it in the 20's and then couldn't get to operate until probably the 70s or 80s
Click to expand...

Makes the mind ponder just how they ever got it to work?
N

well gotta understand what portals are, how they work then you can reverse engineer it.
artificial portals aren't complex technology, been done a lot. People today just ignore the technical information to do it.

once ya understand the fundamentals it's easy
Last edited: Apr 7, 2018
F

all depends on what kind of portal you're referring to, spiritual or mechanical.
N

you're on a site that's based upon the spiritual side. did you just come here for laughs or answers?
N

lamdo263 said:
Makes the mind ponder just how they ever got it to work?
Click to expand...

I'm pretty good in the art of remote viewing mainly because I am of a mixed breed not found here on Earth anymore. I entered in the search protocols, (find me an active star gate) and what came up in my light state of waking conscious, was a light tan colored stone lintel, stone top piece, which rested on two also square columns. This came to me in similar fashion like a photograph would and I could see the entire doorway in detail, so chose to step back in my visualization of this all stone wall and doorway with a black entry, say, where the door would be hung.

You can move vertically up just like in a video game and my guardian was telling me to do this and get a good grip on that lintel top piece. I then let my vision go down a bit and while it was black, saw nothing as one would start to extend their vision into the doorway.
All of a sudden I began to see stars and they were streaking as if the stars themselves were starting to pull away from my viewpoint.

All of a sudden on the rest of me, I could begin to feel this constant pull, like how the current on a river of stream begins to take a body.
I quickly got the idea, if I didn't then get out of that current's pull, that my spirt soul ability to see from a safe neutrally safe point of view, would be taken in their too. So I pulled myself out and away.

This was underground deep, but I think not too deep and it's always turned on. Scared the living sh*t out of me and I'll never do that again. This happened, no B.S.

NaturalPhilosopher said:
I think the movie was correct...that they found it in the 20's and then couldn't get to operate until probably the 70s or 80s. The tv show explained that the 'dial-home-device(dhd)' wasn't found with the stargate and they had to make an artificial one to operate it.