ZetaTalk Prediction 7/15/1995: The pole shift, of course, radically affects the climate of every place on Earth. How could it not? The equator has changed, and formerly temperate and even polar areas now find themselves under the hot, continuous equatorial sun. Inhabitants of these areas may find themselves subject to severe sunburn, for the first time in their lives, and, not understanding the phenomena, not know what to do. Other inhabitants, formerly in the equator, will quickly freeze to death. The temperature plunges, unremittingly, and they are ill prepared. Over time the plants and animals change, accommodating the climatic change. Plants, in particular, are hard hit, as they are sensitive to the temperature, humidity, and exposure to sun and wind. The die off is massive, but certain other opportunists survive. Over time, there is a creep that occurs, such that from places where the climate has remained the same plants grow outward toward where they find conditions hospitable. The opportunists who took over, preempting all the strugglers, find they are being pushed, steadily, to assume their former status. Animals, being mobile, are less hard hit, and either adjust their day and night to the new conditions or travel. After a time, a few centuries, the Earth looks much as it did before, only this time with new poles, a new equator, and newly established temperate zones.

What about the flooding in the Aftertime, where the Zetas have stated due to friction during the shift, the plate beneath the cold ocean waters will heat up, heating and swelling the water too, so that the Earth’s oceans and seas rise 675 feet on average? The National Geographic Channel has depicted this too, in their Polar Apocalypse show, where the poles melt, raising the sea level an estimated 200 feet when Greenland is included. This is enough to engulf coastal cities. In the stopped rotation segment, northern cities were depicted as being engulfed completely when the water normally kept around the Equator by the centrifugal force of rotation drifts north. And indeed in the ZetaTalk prediction much of Canada and certainly Siberia will disappear in the Aftertime due to flooding. 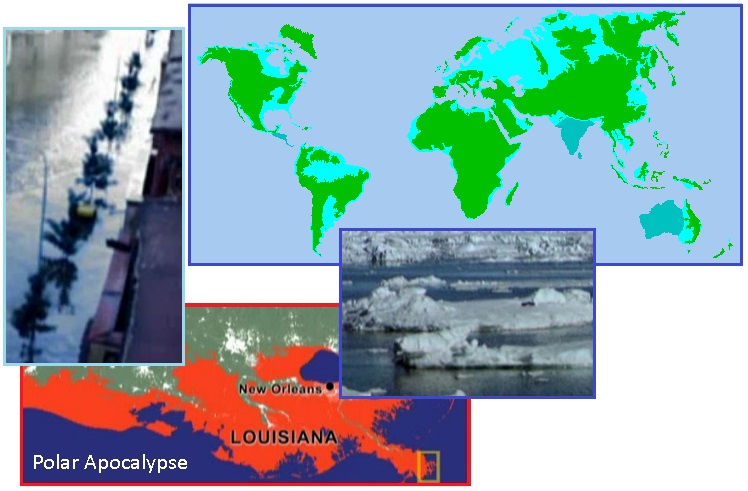 ZetaTalk Prediction 7/15/1995: In computing the rise in the seas to 675 feet, more than the melting of Antarctic and Greenland ice is presumed, as this rise has been computed by man to be only 200 feet. What is missing from this equation is swelling of land masses, land surface under the water, as odd as this concept might sound. Thus, where this cannot be computed by man, being a missing dynamic in his statistics, this is the explanation for why our 675 foot rise does not compute given the known factors - water volume and increase per degree of heat rise.

I have to ask. In your map it has an arrow pointing to the Hopi Nation. Why? 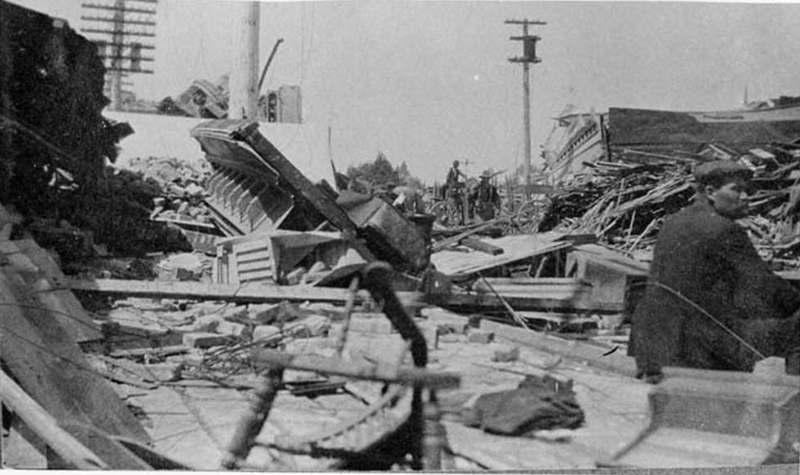 FEMA estimates that more than 7 million people would be displaced, and at least 15 bridges destroyed if a major earthquake hits the New Madrid fault line. They are also concerned about the issues that could arise from the 15 nuclear power stations in the area. They are all the same design as the Fukushima plant, which we now know, are prone to earthquake damage.

The New Madrid fault line runs from Cairo, Illinois to Marked Tree, Arkansas, a distance of 130 miles. The upper end of the fault is beneath the Mississippi Delta. 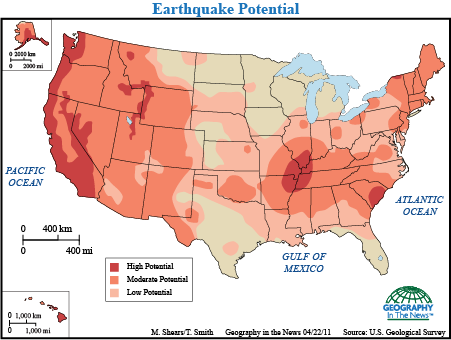 The location of the New Madrid makes it prone to very destructive quakes due to the ground composition. Earthquakes are magnified when they move through unconsolidated ground such as gravel, sand and silt. All materials that are abundant in the area. When water is added into the mix, as it would be along the line of the fault liquefaction occurs. Liquefaction causes the water in the soil to come to the surface and buildings literally topple over, or sink, often almost completely intact.

The following video is grainy, it was filmed in 1964 in Japan. The first 20 seconds show liquefaction during an earthquake, the film returns to the liquefaction at 36 seconds.


In addition to the 7 million displaced it’s estimated that a further 8 million people would be affected in some way by a New Madrid quake.

The area isn’t new to earthquakes. A series of quakes in 1811-1812 are well documented. Reelfoot Lake in Tennessee was formed when the ground subsided during one of them.

So, in the light of all that why would anyone chose to build nuclear power stations in such an area?

The USGS conducted a survey in 2009 that concluded that a major quake on the New Madrid would result in catastrophic loss of life and that severe damage to buildings and infrastructure would occur. In part this is because there are few requirements that building are ‘hardened’ as they are in California.

Again, why is there no regulation for the hardening of buildings and infrastructure in a known earthquake area?

Alabama, Arkansas, Illinois,Indiana, Kentucky, Mississippi, Missouri and Tennessee all sit along the fault line. You would have thought that with eight states and up to 15 million people affected the New Madrid would be in the news a good deal more than it is.

Sources:
Remembering a Grim Bicentennial – Could 'The Big One' Happen Again?

Interesting, I will pass this onto my relatives who live in those areas as I'm pretty sure they're unaware of it.