FarOutThere said:
Proving time travel would be about the stupidest thing anyone could do, of course not!

(Not that I claimed I could or anything)
Click to expand...

It would be a VERY intelligent guy to have built a time-machine not someone stupid, who ALSO has to be extremely clever enough to avoid all of the Governments on this planet from terminating him, dont you think so? ..

TimeFlipper said:
It would be a VERY intelligent guy to have built a time-machine not someone stupid, who ALSO has to be extremely clever enough to avoid all of the Governments on this planet from terminating him, dont you think so? ..
Click to expand...

Yes, at least the Chinese won't. Because the Chinese prophecy Book Zhouyi does not admit to go back to the past, but Zhouyi can predict the future! In ancient times, there were many prophecies about the fate of China. At present, I think it is possible for Britain or the United States to manufacture time machines. Of course, France and Russia have certain scientific strength. Making a time machine requires imagination and scientific creation. In addition, someone needs to invest money.This is also scientific gambling.
Many governments fear that someone will implement them and then try to change history. PRC in particular. mean, the Communist Party of China doesn't want people to build time machines to change history. So it's a disaster for the time machine to come to PRC.
Last edited: Mar 5, 2021

toastwang said:
I agree with timeflip never any actual proof the HDR works as a time travel device just videos of people turning their wristwatch. Still a cool feat but personally I think it’s caused by the magnetic fields and position of the watch or device.

do you think spreading teaching of time travel would have consequence?
Click to expand...

Einstein said:
Not likely. I don't have the money to pursue either.
Click to expand...

I don't have any money at the moment for that either!
But soon I will have it!
Hey, I saw in a comment from you later on on this topic of you saying that nobody knows the origin of time, or how it works, tip, also look at Warren York's work ... He also worked on secret projects, this one guy has good credibility! He even did a new math called 4Pi geometry, and that math is able to solve the problems of Heisenberg's uncertainty (staying with the certainty, no longer with the uncertainty), it is truly the mathematics of time! This guy got real "time dilation effects"! Proven!
So tip me is, get to know about Warren! I talk with him! He is very nice!
After that, find out about conscience and time! Because consciousness is directly linked to time and frequency ...
Frequency? What frequency? Yes, frequency and harmonics of a frequency! Scalar potentials! Those are the frequencies! Scalar waves are waves of time! Not from space!
The Hutchison effect has absolutely everything to do with time! Think abou it!
Hutchison also caused real effects of temporal dilation! Lightning produces scalar waves! Lightning produces EVOs (Exotic Vacuum Objects) this also has everything to do with scalar waves! Plasma produce scalar waves! Hutchison played with all of this! And when Tesla was hit by lightning he saw the future! Think about it! The secret is not only in the rays, the rays are just a natural phenomenon for scalar waves!
Think about it! This is the secret! Search Warren! Study those things that I have indicated! Learn as much math as you can! And always think outside the box! Because thinking outside the box knowing the mathematical bases we have allows us to do new math too! New mathematics / physics may appear on your study path! And the best can be your own ideas! Hey! Also search for Levinson's time equations(Montauk Project)!
See you friend!
Sorry for my english be bad! I'm brazilian! And I'm use the google translator in this moment! I'm not fluent yet! Sorry!

OPS.: Tell me if you don't understand something you said because my English is bad...

Take this reading as a gift too! 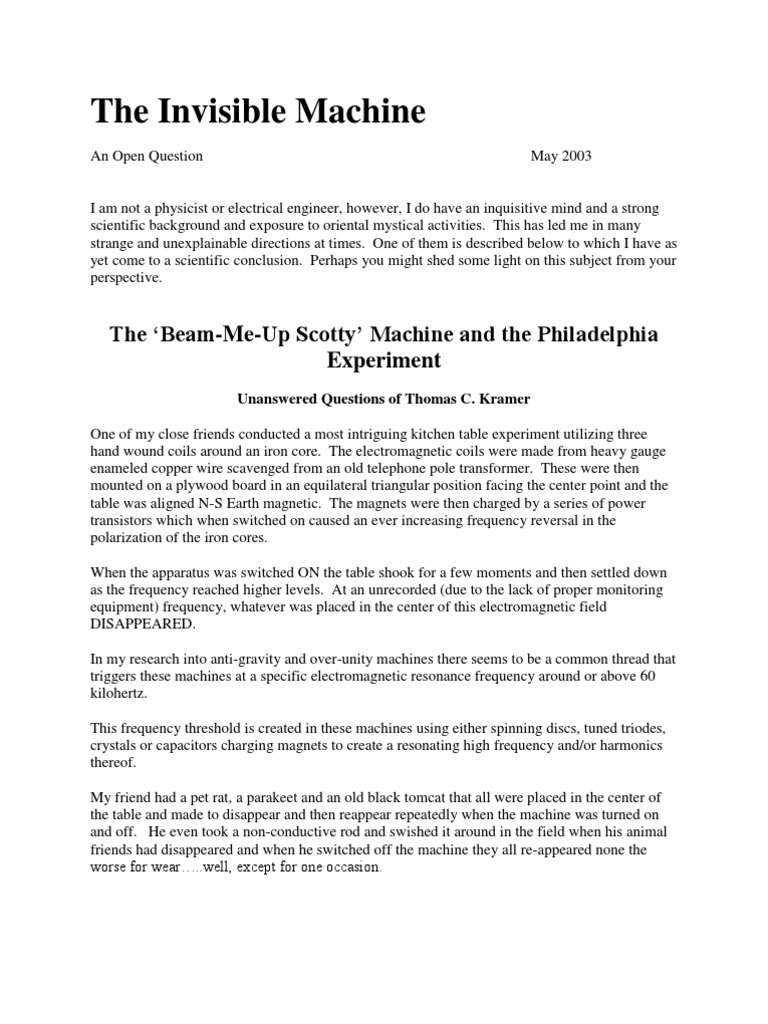 pt.scribd.com
It is very good and interesting! If you also want to chat more with Thomas (author of this article), I can provide his(Thomas) contact email for you!

Einstein said:
When I had money I was pursuing the building of a time machine. But nothing works. I think the reason for that is we are being deprived of key information on how our reality is put together. One step forward and two steps backwards is the path I have learned to use in my search. No one apparently has a clear understanding of how time works or what time actually is.
Click to expand...