George Floyd represents US all

walt willis said:
Figures can lie and liars can figure so it may help to do your homework before you assume too much. Blacks make up around 13.3% of the US population and black males around 6% yet back in 1997 the FBI's Uniform Crime Report UCR stated that they are responsible for 87% of the US murders. Listen to Tommy Sotomayor and maybe that will also explain more:
Click to expand...

walt willis said:
So crime is low in Germany: Now for the rest of the story...If you remove the top 20 US cities from your crime report you may better understand.
Also 13% of the US population in black, but those folks have a crime problem that far exceeds the general population.
Now lets compare apples with apples and see where that goes.

I think, Cities have always more crime in ever country. The city people cannot behave that good as non-city people. They are several
proposed reasons. In the US there are usually several paralell societies. That is also the case in Germany.

I think it depends how they are raised. Especially the family and culture. Blacks are not that violent here in Germany. But they are also not the best group but in the middle. But they have very few mulitiple offenders. The picture is not criminality but violent behaviour. That is only the statistics of adolescents on the ninth grade in school. Dark blue means prevalence of violence and light blue means multiple offenders.

Afrika=Africa means Black. The least violent groups are Asians and than Germans 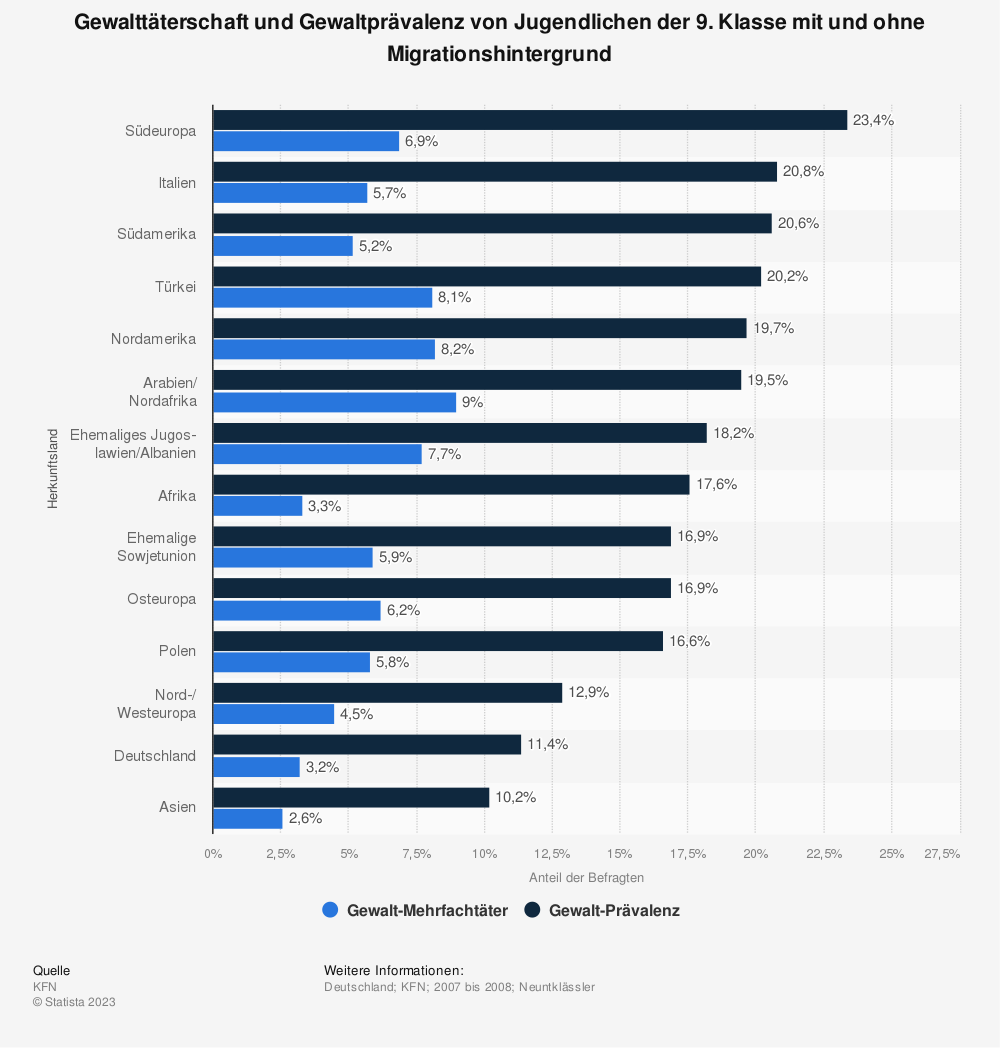 The police had also a general statistics and the most violent group were North-African but I dont find the study anymore. Criminality is something different. But they also have statistics of that, but I would have to search. i think the magic world is not integration it is inclusion.
Last edited: Jul 12, 2020

walt willis said:
When I was drafted into the Army I was confronted by a group of blacks that said I must hate blacks. I told them that I never knew any blacks as growing up on a farm but they were giving me a bad first impression. The same thing may be true of a cop having to deal with confrontational blacks. It's called attitude and respect. Play stupid games, win stupid rewards. Yes there are evil cops that should never have been given a weapon and badge, but if we elect stupid leaders that hire stupid cops, who is to blame? The blue state run by democrats seem to be the hot spots of trouble. It may help to have more black cops to serve in the hood? Then we'll see how that works out?
Click to expand...

start at edge said:
You’re right. It is not the skin color that is alarming, but the fact itself – people are murdered all the time. I posted an example of such situation, where some white cops (there are no black cops in that region) murdered a white man (there are also no black people in that region)
Click to expand...

I dont see that much difference. But I dont know the exact per cent of each race in the population and the general criminality of each race. Those that are more criminal should usually get shot more often. I think that is clear. 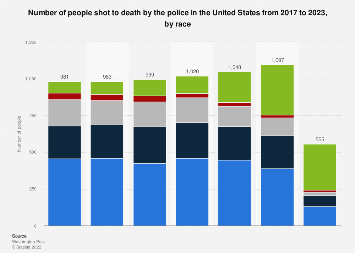 Sadly, the trend of fatal police shootings in the United States seems to only be increasing, with a total 506 civilians having been shot, 105 of whom were Black, as of June 30, 2020. 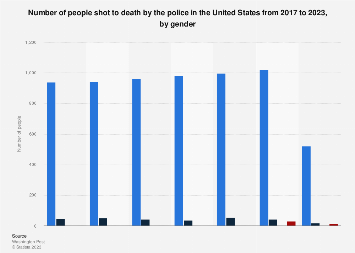 This statistic shows the number of people shot to death by the U.S.

So women seem to be far more privileged there. Assume that women and men are equally criminal. I dont know if that is the case.
W

You are welcome to read the FBI uniform crime report that is published every year.

I was thinking about minorities and there is an interesting picture here – it seems they feel about themselves as being some sort of “resistance” only if they feel threatened, if they feel oppression, discrimination and/or injustice. They have the tendency to slip towards bad behavior only if they have a reason to, otherwise they simply enjoy some plus of so to say “privilege” given to them by the society just BECAUSE they are a minority (social, political, religious, or whatever) … then I thought of majorities and something very interesting popped out – they seem to do the exact same thing, they feel uneasy, even angry, when threatened. So, the recipe for having everything nice and smooth in a society seems to be somehow simple, at least at first sight – rulers and those in charge of that specific society (country/nation/population), please manage it so that all participants and members to be satisfied by the life they have, or at least do not create additional problems to them (be it majority or minority).
Since after 2nd WW, Germany tries to avoid any pointing fingers, so they do everything they can to make life nice and good for all the people living there … no wonder the criminality is low in Germany. The sad thing is that they managed to push all those negative aspects out of their own country … and where ?!?! – to the less fortunate (less powerful) EU members. So now, they can easily find an excuse and say “the problem is not here, it is in Hungary, Bulgaria, Poland, Romania, Moldova, etc.”
The U.K. did not want to be part of this masquerade anymore and so they got out of it, which was a perfect moral example, for which reason I sincerely congratulate them. If other members won’t do the same, it is only because those put in charge there, do not want to, they desperately hold on to their own advantages provided by the whole system, advantages that were given, not gained.
W

It seems you just found out about fake news. It's 100% fake.

paulyoung2 said:
how is the detoxification of the soup going? had enough already?
you let me know when you had enough
Click to expand...

Oh, … sorry for the delay – when previously looking at this^, it had a completely different content.
I see you finally realized that since you are stuck here anyway, you have no choice but to adapt to OUR world … and you also started try learning – that is good for you. You’ll catch on and get used to everything in no time, don’t worry.
Now that you tested yourself the editing feature here (and saw for yourself that WE don’t lie when WE say this is the way it works), I’ll do you the favor of replying and close any further editing – you made some progress (congratulations) and you deserve it.
The (future) signature is gone (which is good, especially for you), yet the soup thing remained … you’ll have to work on that a little more, but you’ll finally manage to handle things.
You also got rid of the slime you were forced into and you are starting to refine your tastes, your thoughts and yourself. Adapting is pretty harsh, but you’ll do just fine in the end, you’ll see.

Einstein said:
It seems you just found out about fake news. It's 100% fake.
Click to expand...