The pyramid was built from the inside out. Some french researchers got access and found a spiral tunnel inside on the outer edge of the pyramid just inside the surface. The notch at the top of the pyramid at one corner hasn't been fully explored. Was an internal spiral ramp with a pulley system that lowered a counterweight down the kings chamber to lift the limestone and granite slabs. How to Build a Pyramid - Archaeology Magazine Archive

Of course people claim they didn't have the wheel but that was nonesense. The "boat pits" in front were really giant cutting wheels for the rocks. Kent Dunn did excellent work in discovering machine tool marks on many statues, construction blocks all over the place. Gotta remember, under the casing stones of the great pyramid, the rocks are rough hewn. They don't fit together with extreme precision. Large gaps between them.

Only question is where are all the wheels of the era. All this tech was priviledged use for large construction efforts and then all squirrelled away somewhere. Egyptian royalty and elites had this tech but of course was all hidden.

Anyways still means the pyramid was built in 10,500BC like Edgar Cayce claimed by Atlantean refugees from Turkey that later emigrated to Egypt.

This was all built upon the hall of records chamber that was found in the 1970's by a private group of researchers from Greece. They found a piece of composed music from ancient athens that when was decoded explained you had to play the music at a stone near the western face of the pyramid at a certain astrological alignment and it would move back revealing a passageway. They did so and gained entry to a very steep staircase that went down as far as the pyramid is high underground. Where they found a large metal door and played the same music on their walkman. It also opened and revealed a pristine perfect room with no dirt and perfectly illuminated with no lightsource visible. Anyways was several football fields in size and several floors all with rows and rows of bookcases containing flexible indestructible metal sheets with embossed purple and pink unknown lettering.

Some objects were bigger than the door that allowed them entry. Meaning the entire place was built around it. 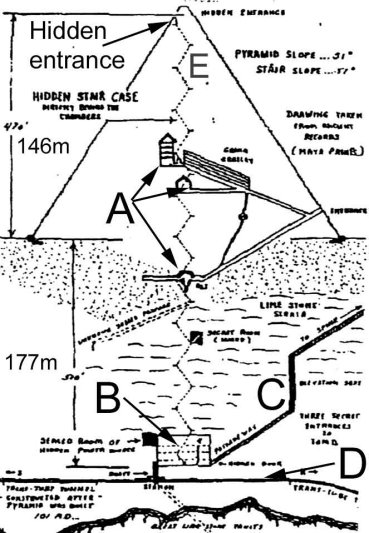 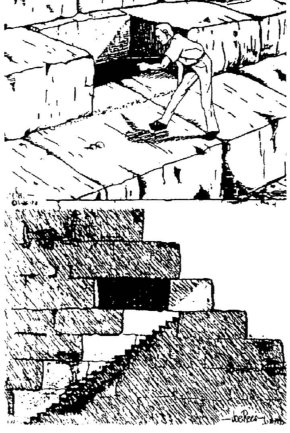 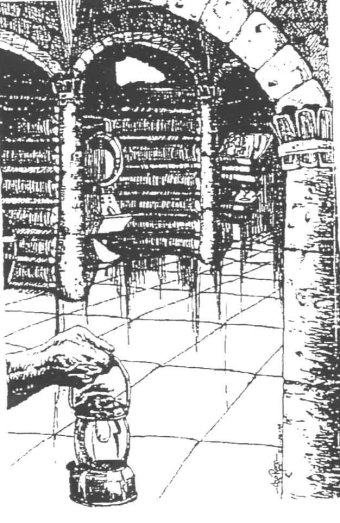 There was a tunnel located at the bottom of this chamber leading to the sphinx. This is the hall of records that Edgar Cayce said was located underneath one of the paws of the Sphinx.

Full story: secrets of the pyramid

David Hamel also who was an alien contactee who appeared on his television set and materialized flower buds all around his house as proof of the contact claimed the great pyramid is really two pyramids. One pointing up and one pointing down underneath it. If you look at that graphic above, the hall of records is exactly far down as the pyramid is high. David Hamel used full color photograph books of egyptian hieroglyphics from the late 19th century and early 20th to eventully build a working ufo system using metal cones lined with magnets all resting on a granite ball bearing system. 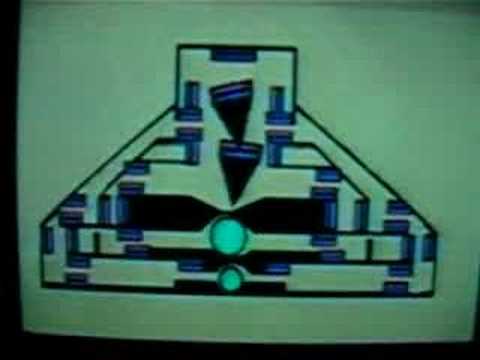 He said he got the information on how to build it from publicly available egyptian hieroglyphics.

"If you look on the walls of the pyramids, you will see my theories"
-David Hamel.

"David details the how the Nubians inscribed the theory of Free Energy on the walls of the Pyramids!"


Little known but accepted fact, the great pyramid and the 2 others were surrounded by a seawall. The entire gaza plateau was flooded around the pyramids like a lake. This is what the plateau looked like originally: 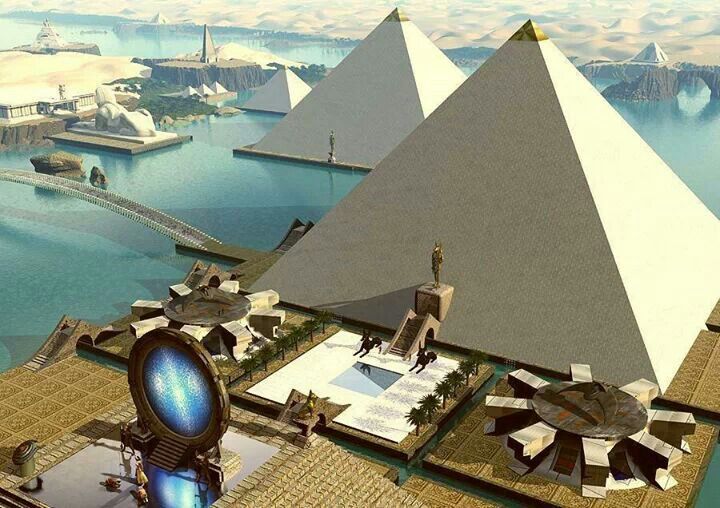 Not everything was built at once. The entire plateau and all the structures were added to over time as a giant initiation spiritual ascension testing and teaching center and time capsule of important information and technology. Yes, the stargate ring is also real. They found a tunnel shaped large diameter tube in the room underneath the pyramid. Is a teleporter. Can read about it.

The ancient egyptian culture and civilization existed way before recorded science claims. If you read what the egyptians actually say, they claim their entire civilization was destroyed in a major apocalyptic event and only megalithic sites survived. The emerald tablets of Thoth claim the same. That they were put into a stone pillar before an apocalyptic event and were discovered afterwards inside. They rebuilt later as what we know as ancient egypt. Same with ancient greece which existed from around 1000BC to about 300 to 500BC. They also existed as an extremely technologically advanced society waaay back in in time. During atlantean times. 26,000yrs ago but were wiped out as well likely by a nuclear war and pole shift tidal wave. Only thing that would remain would be giant megalithic sites and underground cavern civilizations.

Why there are so many rumors of atlantean civilizations in underground caves, only thing that would survive. Even Plato was sworn to secrecy by his grandfather Solon to never reveal the secret teachings he got about Atlantis. Said it was a secret that Athens existed tens of thousands of years before it's more modern counterpart as a sister civilization to Atlantis.

Elites or scholars in prehistory could've found the underground civilizations that pre-ancient athens would've fled into before an apocalyptic event. What would survive of the entire modern world during a sudden pole shift and a 2 mile high oceanic tidal wave? Absolutely nothing. Would strip america, europe, asia, africa down to it's bedrock, taking all dirt, plants, everything to the bottom of the ocean. Only things that would exist would be already sunken cities from entire land masses sinking beneath the sea beforehand or in caverns deep underground. The great pyramid is essentially an artificial mountain.

Not to mention a radical shock to the world energy grid. If it did happen it could produce energy to wipe the memory of every single survivor. Just like how aliens do it to abductees but on a global scale. Is that why nobody remembers Atlantis and there's barely any historical information about it?

It's all in front of your face.

So was that a good article? Wrote it myself, yay me.

@NaturalPhilosopher - Do you believe the Great Pyramids at Giza were power plants or something like that?
N

yeah
all pyramids alter time, anything that alters time is multi-use.