Been using this for a while now.

You can basically set any frequency you like increase/decrease
use different keys notes.

You can mix tones by opening the Online Tone Generator in several browser tabs.
To change the wave type from a sine wave (pure tone) to a square/triangle/sawtooth wave, click the button.

I had about 11 of these going at once at different increments, it was an experience

If you assume an energy output over a one year period as a Sine wave of 2 units amplitude at the King's Chamber, then you will also have a Sine wave of 0.8 units in the Pit Chamber, a null in the Queen's Chamber and a 1 unit pulsating wave (no negative excursions ) at the apex.

Be mixing a couple of these later and see how i feel.

One thing about this is you have to find the right volume, too loud and you'll blow your mind.

It has to be subtle, obviously depending on the mix of hz

@Mayhem What is the purpose for all those frequencies, also what is the relevance of the Kings Chamber, the Pit Chamber and the Queens Chamber? ..

The primary functions of the subterranean section is to provide pulse for King’s chamber to start the pyramid running or to create a "mass particle" in the Queen's chamber.

The King’s chamber has design features of a resonating chamber. The granite walls are freestanding and isolated from the surrounding limestone masonry. This allows the room to freely resonate. The Orthodox camp labels the five layers of granite ceiling beams as stress relieving. But Chris Dunn demonstrates that these extra layers add nothing to the strength of the ceiling. A much simpler design similar to the lower Queen’s chamber could have been utilized (see Figure 23). Rather, the extra layers of granite beams are resonating chambers utilized to amplify the rooms resonance.2

Extensive sound testing has been done within this room by Thomas Danley2, John Reid10, Chris Dunn2, and others.

There needs to be a simple means to compensate for variance in water temperature and atmospheric pressure since these factors change the velocity of the compression wave. The “dead end” shaft pumps water (see Figure 24), but mainly allowed for fine-tuning the compression wave timing and frequency. Adjusting backpressure by adjusting a gate valve at the end of the shaft allows for changes in timing. Testing has shown that the pulse rate can be varied by at least 30 percent.

Adjusting the backpressure {67psi to 3360psi at Giza} also changes the water’s density thereby changing the compression wave’s velocity and frequency. This easily allows for fine-tuning of the lower assembly to create a standing wave in the subterranean chamber and wastegate line. 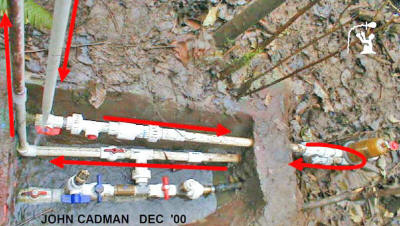 
One of many pipe layouts used to find the best possible configuration for what is under the Giza plateau. Multiple valves were used to verify or negate possibilities, and this layout had 256 binary possibilities. A much simpler layout proved to be the best. To prevent damage to model's “dead end” shaft output, the pipe is stabilized by running it through a cement barrier and then doubling back towards the model.

Its better than drugs,

It takes a little to withstand it.

This reminds me of the iDoser. Ever heard of it?

I took a look at one of the many web sites writing about the iDoser...i was very amused at a particular sub-heading on a web site that said,"We Tried It...It Was Disappointing"...One person said, We decided to give iDoser a fair try, even though we knew it wasnt going to be anything like drugs....

In fact they have a ton of beats, many of which have nothing to do with drugs such as, Relaxation, "Hands Free Orgasm ", fall in love , chakras and more.. .