walt willis said:
I absolutely agree with what you have said that felons should never be trusted with a weapon!
Now for the problem... If a felon is caught with a weapon being used in conjunction of a crime, the weapons charge is dropped.
The courts have ruled that a weapon is an acceptable tool of the criminal trade... Go figure?
Click to expand...


That last sentence there is hyperbole, and that's being generous.

The weapons charge is not always dropped. Sometimes that's the only charge they can prove. The possession charge itself might be dropped every time under your described circumstances. However, the possession of a gun during the comission of a crime is a seperate charge and is used all the time.
A felon being involved in criminal activity involves a more punitive sentence than mere illegal gun possession. Given that sentences usually run concurrently anyway, unless there is some compelling reason to run them consecutively (and burden the rest of us with the associated costs,) why should Law Enforcement or prosecutors spend time and resources on a charge that, if successfully prosecuted, would not change the felon's sentence in the least? 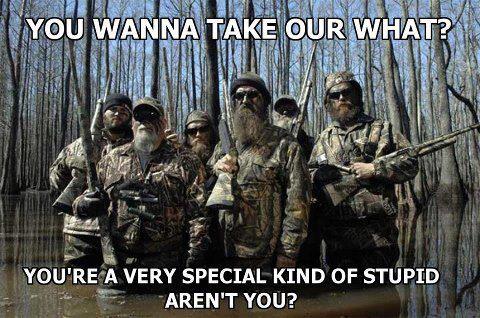 I really have no problem with the cops hunting down the nut bags and criminals to make sure they don't kill anyone...

now we just have to wait and see what comes next....
W

Manned drones like this and don't ask what they carry...
Pay back can be a bitch!

I'm waiting intently to see how well these new open carry laws that are going into effect will have on the general population. Especially the stories coming from the south, about people going into businesses with guns slung over their shoulders. Not saying anything is wrong with that. Just saying I'm waiting to see how this turns out.
W

How long show we all wait?

The first state to issue shall issue carry permits was FL back in 1987...

The following year they reported a 37% drop in crime.

I would call that a good thing if your not a fool liberal that hates guns.
I

Why is the 2nd amendment the only constitutional right you need a permit to use?

Because it says "A well-regulated militia..." and permits are a form of regulation.
W

After my return from army active duty in 1969 I enrolled into a college where I took a series of placement exams.
I got done the verbal interpretation test in less than half the time allowed and was the first to finish.
I was placed into the criminal justice curriculum major because the test score was a grade of 100%.

Long story for a simple answer...sorry.

Now to make comments contrary to the highest court in the land, you must know something they may have missed.

Could you please share that information with the people on this forum?