Samstwitch said:
JOHN TITOR: "Yes there were biological and chemical weapons used." (Watch the Klaus Schwab video about that one.)
Click to expand...

Samstwitch said:
Highly esteemed Attorney, Robert Barnes, explains what is happening in the Military and Propaganda Wars between Russia and Ukraine, which is a proxy War with the US/NWO, and the False Flags in Bucha and other War Crimes blamed on Russians that were actually committed by the Azov Nazi Ukraine Army...plus history on the Nazi Azov Army, Putin, and why Russia invaded Ukraine. (Watch the video starting at 4:51 minutes)
Click to expand...

That is an interesting read about the Great Reset and explains the weird Azov stuff that was published in the Western media although Russia has far more racists than Ukraine according to surveys.

You, some other members and also Vladimir Putin totally fall for the new propaganda of the new "Great Reset" plan of Klaus SChwab, because Covid failed and they have to somehow introduce their social credit scores (which they tested in China):

Ukraine would be presented as a victim, while also disseminating disturbing images of the NeoNazis preserved in their midst through the legacy media.


Russia would be presented as aggressor, while its own story of victim-hood would be widely disseminated through its own media and through "independent" outlets.


This would provide a rich growth medium for polarized controversy.
Click to expand...

Plan B: Ukraine War is New Route to Great Reset

Putin may not last long anyhow 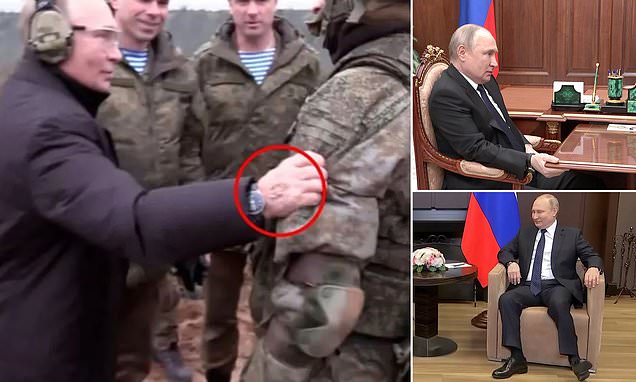 Vladimir Putin 'DOES have Parkinson's and cancer, leaked emails say'

The Russian leader has been plagued with rumours about his ill health for months and he has regularly appeared twitching and unsteady while in public.

there is no after putin... too strong.. too street smart.. intelligence agent... yes time will do its thing and he gets old... but he is head of super power
the deep state cant touch him though for various reasons one of the major reasons is the secret they share
you do notice antarctica is off limit to you right? (i am talking about beyond the idiotic flagged strip and its very limited surroundings)
and forever will be if it is up to the deep state and it is up to the deep state
T

It doesn't really surprise me that Titor would "predict" a war with Russia. The Cold War ended just eight years prior to Titor's postings, which means that the Cold War was as close in proximity to Titor as the Malaysian Flight 370 disaster is to us right now. Russia has historically had tensions with the US for many decades so it's the obvious pick for a prediction about a third World War. I don't think it lends any credibility to his predictions, the vast majority of which never came to pass.
You must log in or register to reply here.
Share:
Facebook Twitter Reddit Pinterest Tumblr WhatsApp Email Share Link