Media Why The Sun May Suddenly Destroy All of Our Electronics

scott93257 said:
We actually know more about outer space than we know of the depths of our own oceans. Pretty amazing isn't it? Challenger deep is supposedly the deepest part of the ocean but I am willing to bet there are depths that far exceed that.
Click to expand...

But i am not sure if i actually believe in the sun coming so close to destroying our electrions like that though.
I

The earth got grazed by one last month. Been a lil hot. Everything’s still fine for now 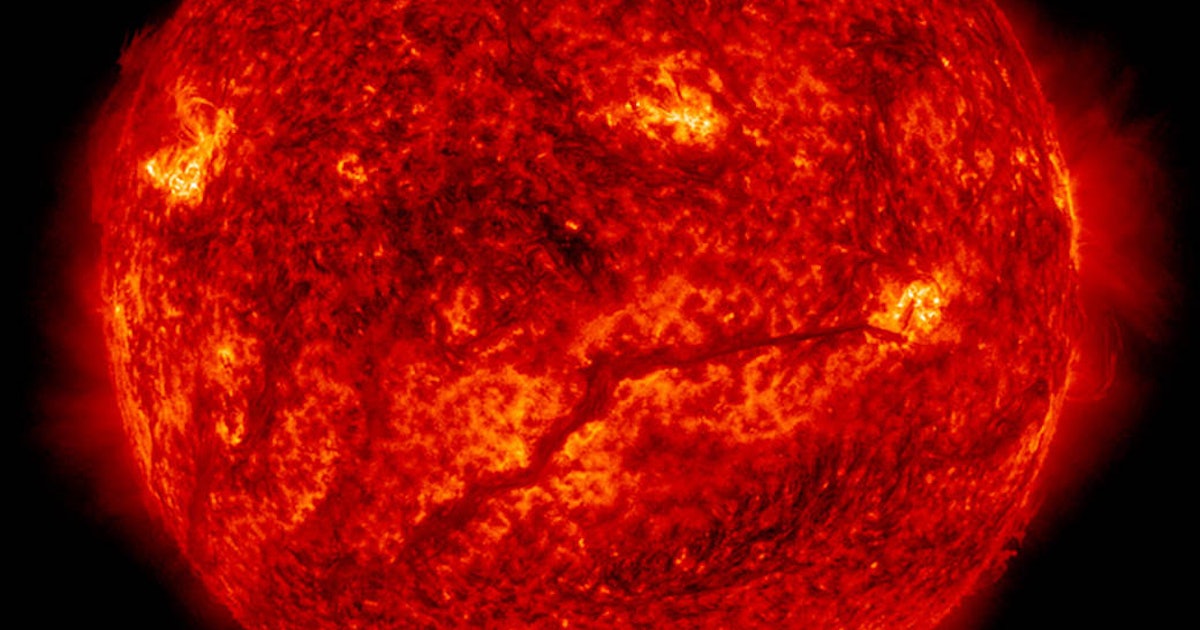 The science behind that solar flareup headed for Earth's magnetic field

NOAA revealed that Earth could be grazed by a coronal mass ejection on Thursday, which may cause minor geomagnetic storms.

What most people don't understand is that the electromagnetic pulse of a solar flare is in itself not all that destructive. The Earth has been hit many times in the centuries that man has been around. in the past about all that it caused was some wild looking night sky as the aurora effect caused by it would be seen in places where they were not normally visible.

The problem with it now has to do with the way we make electricity. All a generator is is a bunch of wire run in and out of a magnetic field over and over. In the past there wasn't much wire just hanging around. In the mid-1800s we got hit by a big pulse and that was the first time it did more than making funny looking night skies. The pulse passing across hundreds of miles of telegraph wires generated a big electrical surge that zapped some telegraph operators and caused a bunch of fires. The amount of power generated has to do with the length of the wire and the strength of the magnetic field. A generator will have hundreds of wire wrapped around an axel and then it is spun through a magnetic field. How many millions of miles of wire do we have hanging on poles just in the US? If you hit that wire with a STRONG magnetic field the amount of voltage generated would be MASSIVE. This level of power surge would blow all the transformers right off the poles. It would meltdown most of our generation plants when a surge many times stronger than what that plant puts out runs back into it.

There would be fires all over the place and with the electric systems down all over the country and the communication lines gone it would be total chaos. If the surge was powerful enough our homes which are wooden boxes wrapped in wire might burn down like a place struck by lightning. Modern autos and trucks have miles of wire in them and then they are run by tiny computers that have hair-fine wires in them. It isn't that the basic motor and system is damaged, it is the delicate computer control systems that run the system with be fried. Old school cars and trucks with none of the computer stuff would probably survive but anything much less than 40 years old would not make it.

If the entire system went down it would take, best case scenario, 5 years to get us back to 1950 level power and complexity. You have to understand, the place that makes the things that we will need are gone, and the things that we need to fix them come from places that also are gone. A year later 90% of the people will be dead. Starvation, disease, and the COLD are deadly without our modern systems. Places like NYC have enough food to feed its people for THREE DAYS on average and they are dependent on constant shipments that will STOP. If this were to happen in the dead of winter I figure that fires would kill more people than the cold. Modern homes are not made to be heated with an open fire!!!

Where I was raised and kive we have been hit by a lot of Hurricanes and had the power go down for as long as two weeks. losing power for a few days has happened a lot of times. I was amazed that many people were in trouble within a couple of days. they opened up places where you could get bottled water, MREs and a bag of ice and the lines were miles long!!!! I live out in the woods and we don't get taken care of very fast when there is a lot of people without power. We are always ready and in general, have a pretty good time when the power goes down. We are ALWAYS prepared to go a few weeks without power. We have food for several months and live in a place where I can hunt and fish to stretch that out indefinitely. I am among the odd though and am much more aware of what we will need so for people like us no power wouldn't be as urgent of a problem.

The sun is intelligent, but not in a way humans understand.

You can push start a motorcycle. I used to push start my old Nissan pickup truck.

scott93257 said:
We actually know more about outer space than we know of the depths of our own oceans. Pretty amazing isn't it? Challenger deep is supposedly the deepest part of the ocean but I am willing to bet there are depths that far exceed that.
Click to expand...

Witch Hunt said:
You can push start a motorcycle. I used to push start my old Nissan pickup truck.
Click to expand...

Fortunately for me, all the cars I first owned were equipped with "starting handles", which "turned over the engine" and created a spark that ignited the petrol mixture, in the event of the cars battery being knackered!!..

Starting handles were a God Send to guys who couldnt afford a new battery immediately, when they failed...We could extend the life of a battery by putting small amounts of distilled water into it...Nowadays all modern day cars have sealed batteries...

Another highly useful piece of kit for a car was WD-40, a water displacement product that was great for removing water vapour of our old cars spark plugs...WD-40 is still being used today, for many many purposes other than keeping water off spark plugs!!...Below is an advert from 1964 for WD-40...Snowflakes or people that are easily offended should NOT read what the advert says!! Admin might get rid of it anyways ..