Will you be taking the Covid Vaccine?

passerby said:
It's not a vaccine.

In 2017, there was an article published stating that someone had developed an implantable RFID chip one fifth the width of a human hair (small enough to fit in a syringe). It works at 60 GHz, one of the 5G frequencies. Why do you think the micro towers have been going up at fever pitch during lockdown? Radio-frequency devices one-fifth the diameter of human hair have been created. They may make it possible to analyze diseases from inside individual cells.

Also, many years ago, a guy named Aaron Russo befriended the Rockefellers and was told that the plan is to get everyone chipped in order to make them slaves. Have you ever heard of a planet-wide vaccination campaign before? I didn't think so.


On top of all of that, with Crispr gene editing, they can modify the human germline, so if you have kids after getting injected, their DNA will also be permanently altered, even if they don't get injected. This is extinction level event kind of stuff.

To top it all off, supposedly the 60 GHz electromagnetic waves from 5G interfere with the binding of oxygen to hemoglobin, causing respiratory problems which could easily be mistaken for a virus. Wuhan was the first city in China to turn on their transmitters. In the US & Italy, supposed outbreaks occurred in close proximity to the Rockefeller Foundation.

Also, the Soviet Union had an internal passport which restricted where people could live or travel. The aforementioned pooheads and their minions have been working on something called CoviPass and ID2020.

In answer to your question: hell no.
Click to expand...

covid goes into both the prostate gland and in the testicles. So this vaccine attacking the process of spermatogenesis in one's menagerie is probably not a real hot idea. This would be analogous to starting a war in a woman's vagina. Probably not a place for backup heavy artillery? 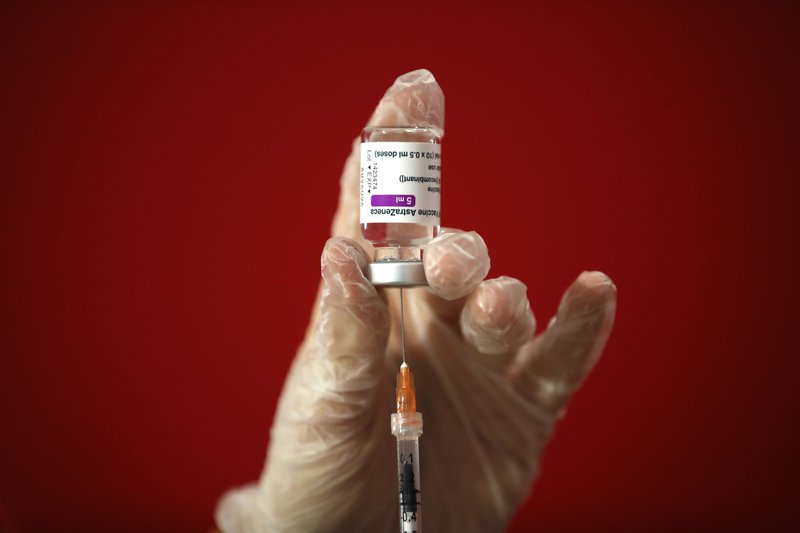 1 of 7
FILE - In this Monday, March 8, 2021 file photo a health worker shows the media how she prepares a dose of the AstraZeneca vaccine to be administered to a patient at a vaccination center set up in front of Rome's Termini central station. Nearly a dozen countries including Germany, France and Italy temporarily suspended their use of AstraZeneca's coronavirus vaccine after reports last week that some people in Denmark and Norway who got a dose developed blood clots, even though there's no evidence that the shot was responsible. (AP Photo/Alessandra Tarantino, File)

BERLIN (AP) — A cascading number of European countries — including Germany, France, Italy and Spain — suspended use of AstraZeneca’s COVID-19 vaccine Monday over reports of dangerous blood clots in some recipients, though the company and international regulators say there is no evidence the shot is to blame.
AstraZeneca’s formula is one of three vaccines in use on the continent. But the escalating concern is another setback for the European Union’s vaccination drive, which has been plagued by shortages and other hurdles and is lagging well behind the campaigns in Britain and the U.S.
The EU’s drug regulatory agency called a meeting for Thursday to review experts’ findings on the AstraZeneca shot and decide whether action needs to be taken.
The furor comes as much of Europe is tightening restrictions on schools and businesses amid surging cases of COVID-19.
Germany’s health minister said the decision to suspend AstraZeneca shots was taken on the advice of the country’s vaccine regulator, the Paul Ehrlich Institute, which called for further investigation into seven cases of clots in the brains of people who had been vaccinated.
“Today’s decision is a purely precautionary measure,” Jens Spahn said.
French President Emmanuel Macron said his country will likewise stop dispensing the vaccine until at least Tuesday afternoon. Italy also announced a temporary ban, as did Spain, Portugal and Slovenia.
Other countries that have done so over the past few days include Denmark, which was the first, as well as Ireland, Thailand, the Netherlands, Norway, Iceland, Congo and Bulgaria. Canada and Britain are standing by the vaccine for now.
In the coming weeks, AstraZeneca is expected to apply for U.S. authorization of its vaccine. The U.S. now relies on Pfizer’s, Moderna’s and Johnson & Johnson’s shots.
AstraZeneca said there have been 37 reports of blood clots out of more than 17 million people vaccinated in the 27-country EU and Britain. The drugmaker said there is no evidence the vaccine carries an increased risk of clots.
In fact, it said the incidence of clots is much lower than would be expected to occur naturally in a general population of this size and is similar to that of other licensed COVID-19 vaccines.
The World Health Organization and the EU’s European Medicines Agency have also said that the data does not suggest the vaccine caused the clots and that people should continue to be immunized.
“Many thousands of people develop blood clots annually in the EU for different reasons,” the European Medicines Agency said. The incidence in vaccinated people “seems not to be higher than that seen in the general population.”
The agency said that while the investigation is going on, “the benefits of the AstraZeneca vaccine in preventing COVID-19, with its associated risk of hospitalization and death, outweigh the risks of side effects.”
Blood clots can travel through the body and cause heart attacks, strokes and deadly blockages in the lungs. AstraZeneca reported 15 cases of deep vein thrombosis, or a type of clot that often develops in the legs, and 22 instances of pulmonary embolisms, or clots in the lungs.
The AstraZeneca shot has become a key tool in European countries’ efforts to boost their sluggish vaccine rollouts. It is also pillar of a U.N.-backed project known as COVAX that aims to supply COVID-19 vaccines to poorer countries. That program continues unaffected by the European suspension.
Pfizer’s and Moderna’s vaccines are also used on the European continent, and J&J’s one-shot vaccine has been authorized but not yet delivered.
Dr. Michael Head, a senior research fellow in global health at the University of Southampton in England, said there is no data yet to justify suspending the AstraZeneca vaccine and called the decision “baffling.”
“Halting a vaccine rollout during a pandemic has consequences,” Head said. “This results in delays in protecting people, and the potential for increased vaccine hesitancy, as a result of people who have seen the headlines and understandably become concerned.”
Spahn, the German health minister, defended the country’s decision, saying, “The most important thing for confidence is transparency.” He said both first and second doses would be suspended.
Germany has received slightly over 3 million doses of the AstraZeneca vaccine, and about half of those have so far been administered, compared with almost 7 million of the Pfizer shot and about 285,000 from Moderna.
German authorities have encouraged anyone who feels increasingly ill more than four days after receiving the shot — for example, with persistent headaches or dot-shaped bruises — to seek medical attention.
The head of the Spanish Medicines Agency, Maria Jesús Lamas, said Spain detected its first case of clots on Saturday. She said the ban was “not an easy decision” because it further slows the nation’s vaccination campaign, but it was the “most prudent” approach.
Almost 940,000 people in Spain have received the AstraZeneca shot.
Some European countries, meanwhile, have begun reimposing restrictions in a bid to beat back a resurgence in infections, many of them from variants of the original virus.
In Italy, 80% of children nationwide couldn’t attend classes after stricter rules in more regions took effect on Monday. In Poland, bolstered restrictions were applied to two more regions, including Warsaw. Paris could go into lockdown in a matter of days because intensive care units are getting swamped with COVID-19 patients.
And calls are growing in Germany to “ pull the emergency brake” in regions where cases are rising. 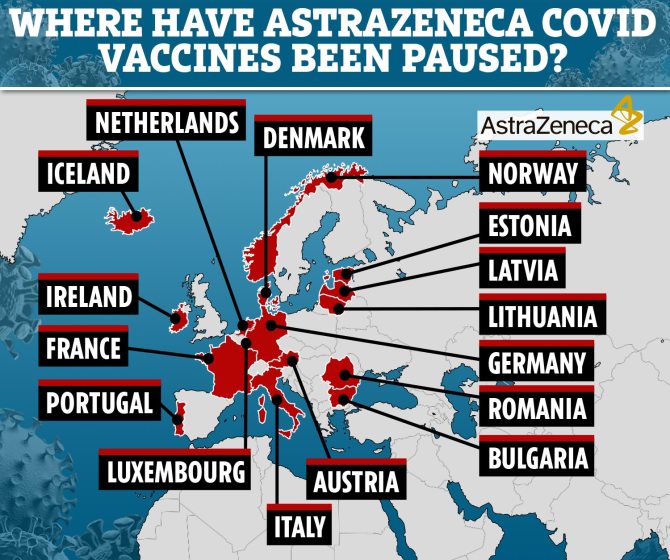 This doesn't include Africa.

Could you imagine vaccines can impair one of your legs for a sec and cause you to have diarrhea?

I already took it. No side effects.

In fact, now I'm even better than I was before. Whenever my back itches I can easily scratch it with the third arm I grew out of my back after the shot.

just insanity this is no joke by the way.. you will see

there is a reason you are under this punishment.. follow the dots.. notice what you are made to look and act like during the punishment and beyond.. you became the feed receivers.. the punishment every part of it made you into the other species you abused.. and no this does not mean you should be a vegan.. this is not why you got the punishment.. you SHOULD hunt for survival this is understood and acceptable.. nothing wrong with eating chicken.. but the punishment you are getting is for severe abuse of the innocent.. everything will be shown to you in due time i assure you that.. it is not enough that jones is trying to help the frogs.. not enough..

until you move your ass and help MY kids YOU will SUFFER to a point of no return... your families will break apart.. you wont see them.. no proper burrials.. no last meets.. no visits.. no close contacts.. muzzles all over.. vaccinated like cattle.. colars on neck and arms.. AI fully submitted.. no freedom to do anythnig but sit home and even that will be under pressure unseen before..

mark my words.. i am never wrong

again no joke.. unlike others who came here before i am the real deal i dont claim specifics.. but i always deliver.. anyone who follow me and what i have done with your internet know i am the real deal and for a very long time
P

^and i know it sounds mean and vicious.. but i am not.. i put it as it is.. you can remove your punishment as i said before.. but rest assured you are UNDER one of the worst punishments your species ever been under
you are not getting out of it with out what i said MUST be done.. all other ways lead to your extinction as you knew it pre 2016

paulyoung2 said:
^and i know it sounds mean and vicious.. but i am not.. i put it as it is.. you can remove your punishment as i said before.. but rest assured you are UNDER one of the worst punishments your species ever been under
you are not getting out of it with out what i said MUST be done.. all other ways lead to your extinction as you knew it pre 2016
Click to expand...

This might not be the case because of the rebound factor.

paulyoung2 said:
^and i know it sounds mean and vicious.. but i am not.. i put it as it is.. you can remove your punishment as i said before.. but rest assured you are UNDER one of the worst punishments your species ever been under
you are not getting out of it with out what i said MUST be done.. all other ways lead to your extinction as you knew it pre 2016
Click to expand...

What Gates and the Illuminati wanted to do was to alter the genetics of humans so they would be dumbed down and subjugated. But the body's ability to heal has thwarted this. Their plans in 2012 to do this were plans of mice and men, plus being a failure.
P